The 2016 riding season started a while ago, however I really kicked it off 2-5 June with a 1169 mile journey through Michigan. There was a STAR Touring and Riding event at Boyne Mountain Resort in Michigan which was the focal point of the ride.

Geoff and I met in Avon Lake, over breakfast, on 2 June to begin the ride which would end in Grand Rapids, MI. My sole reason to choosing this destination was to visit Devin Olson on the eve of his daughter’s high school graduation party. Of course, knowing that Devin lives in The Beer Capital was just a happy coincidence.

Because we had deadlines in Grand Rapids, we took the boring but highway method of reaching our destination. There is nothing quite like arriving on Devin’s doorstep on motorcycles; his welcome was probably one of the best I have ever received. A (rare) beer for me, a (rarer) bourbon for Geoff, and plans made to meet up later in the evening. Devin guided us to our hotel and provided an excellent dinner location in town then left us to our own devices. Used Uber to get us to dinner. Once done with dinner, we walked to The B.O.B and to Founder’s, where Devin met up with us. From there, it was Uber back to the hotel.

Friday started rather early, as we planned to ride the west coast of Michigan. We stopped at a rest area on 31, just south of Ludington to stretch. It was here that we discovered that there was an overlook. Took a very nice road to the top of the hill in order to discover . . . an overlook that overlooked tree tops. I think the word was “disappointing.” From there, we continued on 31 until we got to M-22. While on M-22, we discovered another overlook, this one was spectacular! Incredible views of Lake Michigan and coast line. Continued up M-22 and took it north into Frankfort, where took M-115 and linked up with 31 again. Then it was off to Traverse City, one of my favorite Michigan destinations. A very nice ride along the southern shore of Grand Traverse Bay.

Rode past the (now closed) Bravo Zulu Brewing Company. While it was sad to see, I was wearing my Bravo Zulu t-shirt that day, in honor of an excellent brewery. Arrived at Boyne Mountain Resort at about 5PM to register for the STAR event. Thankfully, one of the hosting Chapters opened registration for us so that we could participate in the bike parade to Boyne City (they had closed registration early). The parade, while short, was a lot of fun as it was escorted by the Boyne City Police Department and the Sheriff. They blocked off an entire city block for us, so that we had ample bike parking. Then, the local Chamber of Commerce passed out flyers with food and shopping discounts specially for us. That was a welcome surprise. After dinner, Geoff and I rode along Lake Charlevoix for picture opportunities. Then, after a 250+ mile day, it was back to the resort for some very welcome bourbon around a fire pit with other STAR members.

Saturday, the STAR Event organizers had an 85 mile route planned for the group. Well, the route, while nice, didn’t include Tunnel of Trees nor the Mackinac Bridge, both of which we really wanted to ride. Michigan STAR members provided us with the reasons they didn’t plan this ride; Tunnel of Trees can be very tricky, as the road is less than 2 lanes, there may be gravel on the road and in the curves, sand on the surface, and very limited sight line. As for Big Mac, the weather plays a very important role in the ride and if there is construction on the bridge, you may end up riding the grated surface for the entire length of the bridge. With that in mind, Geoff, Ted, and I took off to points further north.

It was everything the brochures said it was. And more. Beautiful, twisty, and an absolute blast to ride. The “sandy” portions of the road were under construction, so we didn’t go down the lake shore. That was fine with us, the detour was many miles out of the way. The sight lines were, at times, extremely limited, but, as I was leading the ride, I made it work to Geoff’s and Ted’s advantage. Basically, I rode the middle the of the road and only moved over when there was traffic coming in the opposite direction. In this way, I provided Geoff and Ted with advance warning of oncoming traffic. Some parts of the road were 45 mph, but I cannot for the life of me imagine anyone actually going 45 (see “limited sight lines” and “narrow road way”). In addition to the occasional car, we saw a plethora of bikes. This is truly a Michigan “Bucket List” ride.

How can you top Tunnel of Trees? Easy, continue north and ride the five miles that are “Big Mac.” The day was overcast and windy. We left I-75 before the bridge to talk to someone in the Michigan Welcome Center in Mackinaw City. Since all alerts concerning the bridge are on the radio, and I do not have a radio on my bike, I wanted to know the conditions on the bridge. Any construction? Wind advisories? The helpful staff in the Welcome Center assured us that everything was fine on the bridge. Off we went. While there were no wind advisories, on a motorcycle, it was fun handling the bike in a cross wind. Truly. And, since there was no construction, we rode the paved lane all the way to St. Ignace. That was a pleasant surprise. Stopped in St. Ignace for a Mackinac Bridge patch and pin. Then, rode to an overlook for some picture taking of the bridge. Then, because of an electrical issue with Ted’s bike, we headed back over the bridge. Unfortunately, because of the issue, we cut short our Upper Peninsula ride. We were planning to ride to Sault Ste. Marie and, depending on the time, Whitefish Point. Just have to add those to my bike “Bucket List,” even though I have visited them in the past. There was nothing of importance on the ride back to Boyne Mountain Resort.

Sunday, we missed all of the terrific storms that passed through Michigan and Ohio. However, before stopping for breakfast in Standish, MI, we did don our rain gear as we did encounter some rain, but not of the biblical proportions that were forecasted. We only rode through light rain in some areas, but it was nice to be dry. Plus, as the air temperatures were in the mid to high 60’s, we didn’t sweat in our gear. That is a very nice bonus.

Geoff and I stopped in Sandusky, OH, to see if there was anything that remained of Ohio Bike Week but were greeted with downed trees and power lines, closed roads, and, above all else, the unmistakable smell of beer.

Michigan, on a motorcycle, in a nutshell:

That said, I’ll be back. There’s too much good stuff to see and do in Michigan to let drivers and roads keep me from visiting again on my bike. 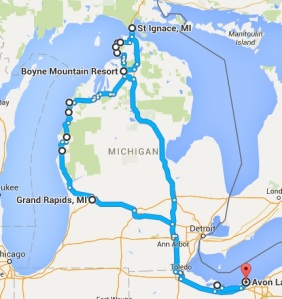 And here is what I saw when I finally turned the bike off in Ohio:

This is a weblog with some basis in IBM/Lotus Notes & Domino software, when I feel like it or think of something that might be interesting. Other than that, we'll see where this goes. The views expressed in this blog are mine alone, and do not reflect the views of NextStep Technologies, LLC. If you think otherwise, you are mistaken. © 2003-2020 NextStep Technologies, LLC. All rights reserved. The rights to all logos, images, etc., are owned by their respective owners. View all posts by Gregg Eldred