A couple of articles on the same topic, the City of Cornwall has decided to move off of IBM Notes to Microsoft Office365 (emphasis, mine).

Cornwall’s information technology department is asking to spend almost $900,000 on software and equipment to keep up with the times.

The budget is proposing $898,000 for several different projects. There is a three-year phase in for a Microsoft Office upgrade and desktop virtualization.

. . . There is also money for moving corporate emails to Microsoft Outlook which will more seamlessly integrate with the other programs the city uses. The migration to Microsoft programs will lead to the city abandoning Lotus Notes, a software suite now owned by IBM, in favour of Microsoft’s shared and remote-computer platforms.

There is also money for a new records management system called for social housing after the province pulled support for implementing such systems recently in favour of producing their own system.

But the “money quote” comes from a second article:

“Hallelujah!” Coun. Bernadette Clement remarked on word the city would be ditching Lotus.

That is exactly the problem IBM has long confronted but never addressed.  Now, that same sentiment will spill over to HCL. You can argue the technological advantages of IBM Notes/Domino all you want, but it doesn’t make any difference in the minds of a lot of users and, more importantly, the decision makers with the purse strings.

So, I ask, “IBM, how is Domino 10 going to change those people’s minds?” Because until you can show me that the updated version is positioned to make people think well about their Domino investment, and I don’t mean the faithful that have attended some or all of your #domino2025 webinars and sessions, it won’t matter. Oh, you’ll keep some accounts that were waffling, maybe gain a couple of new ones, but until you can change the minds of the users, all of the work you are doing on Domino 10, and beyond, will only make the faithful happy.

[Note: I was going to create one post on Connect 2017, but have decided it would be better to break it into sections. This is Part One.]

This was the first year I have attended Connect that I did not attend any sessions that dealt with IBM Notes and IBM Domino. Well, other than the forced sessions, such as the Opening General Session and the Technical Session. It’s not that I don’t want to know what’s coming, it’s that in my current role, I am focusing primarily on IBM Connections. So, if you were expecting something from me on IBM Notes and IBM Domino, this is not the place.

But, I will say this: Last year my team upgraded our Domino 8.5.3 environment to Domino 9.0.1 Social Edition, removed 95% of the IBM Notes clients in the environment by moving users to iNotes, and the remaining 5% of the clients are running IBM Notes 9. Applications? What can be moved to other platforms is nearly complete. What wasn’t moved in the first phase, will be moved, probably this year. Unlike a lot of places, we are using IBM Domino for (strictly) mail. And it’s all on-premises.

That said, I was very impressed with Connect 2017 as a person with an IBM Connections focus.

Wednesday was “Pink Day” at Connect, and in response to that, here is a photo of Jason Gary for your enjoyment or amusement:

I think that Jason must use the same bespoke tailor as Mat Newman.

The browser, I am told, is the future of office productivity tools. From Office365, to Google Apps, to AWS, to IBM SmartCloud. Everything is apparently going to the web. Including, with iNotes, Connections, Docs, and more, the IBM productivity portfolio. The web is the future.

Imagine my surprise, as I attempted to add members to a group in IBM Domino using a web browser, that this functionality is not supported. And there is an SPR out there from 2004 (that would be circa Notes/Domino 6.5/6.0.3) where this functionality has been requested.

Let’s take a quick look at how this manifests itself, using a Domino 9.0.1 FP3 server.

Authenticate and open your Domino Directory using a browser. In my case, that would be Firefox 40.0.2. Click on Groups, click on a group and open it. Using the Action Button to Edit the group, I see this:

The little dropdown arrow, by Members, will allow me to add/remove people from the list. Let’s click on the arrow and see what happens:

However, if you know the user’s hierarchical name, you can simple type it into the “Add name not in list” field. Nothing could possibly go wrong with that, right?

Or, another workaround, is to grant ALL group administrators Edit rights to the Domino Directory with the Group Modifier role. What could go wrong with that option?

SPR PFOI5XLGV9, linked to APAR LO01827, has been open since 31 March 2004. Which, as I’ve noted above, would be in the Notes/Domino 6.5/6.03 time period. We have had a few iterations of the Notes/Domino code since that time and still it is impossible to maintain Domino group membership using a browser.

In IBM’s defense, they have published a TechNote on this topic, Unable to open users dialog list when editing group in names.nsf with a browser, which is from 2008 and includes the 6.5 through 9.0 code stream. But we are no nearer to actually editing groups using a browser in a “browser-centric” world.

When might we enjoy this “basic” functionality? What else may be an issue?

Join members of the IBM Support and Development teams as they discuss iNotes setup and configuration as well as troubleshooting techniques.

iCal link, slides, call-in numbers, and, after the session, Q&A can be found here.

During the OGS at Connect 2014, IBM demonstrated the next iteration of, what can be described as, the next release of Notes. It’s called “MailNext.” While the OGS gave a fairly good overview of the interface, it was when I took the time to visit the Design Studio UX Lab that I received a much better view of MailNext. 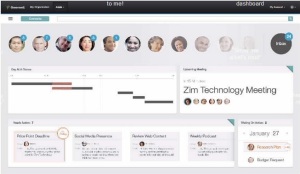 The pictures below the search bar are of people who you are interacting via e-mail. The floating numbers show you the number of messages from that individual. At a glance, you see everything you need for the day. 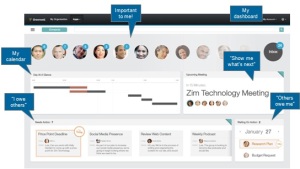 I think that one of the better features is in the lower right. There, it tells you who owes you something. For example, if you assigned a “To Do” or a task. Better, it also shows you that you are waiting for a reply from someone, where you asked for something. I think that this is a great tool for managing your peers and managers.

Looking at the interface, if you click on someone at the top of the screen, it pops up mini menus of things you can do with that person:

Some of the little pop up menu items are mail, calendar, chat, share. 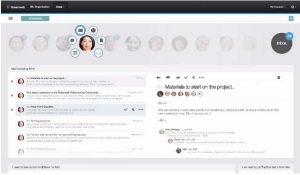 As you have selected the individual, you see the interface change to be person (or “context”) sensitive. In the above screen shot, you see that you get a “what’s new” view, where you can view mail, mail threads from that person or that include that person. On the right, is a “team view,” where that person is included in some sort of project with you.

And, in the upper right, you see that you still haven’t read 26 messages in your Inbox.

Finally, in what could be described as your traditional Inbox view, potential enhancements include in-line attachment preview, an option to share content with a Connections Community, and “powerful search.”

Initial thoughts: While I spent quite some time with a developer in the lab, I was getting the feeling that this interface isn’t totally fleshed out. IBM has some ideas on what they want it to do, however they were very curious as to what I thought some of the icons should mean/do. For example, if I were to hover over a person’s image, and get the mini menus, I expected that if I click on the envelope, a new message would be created, populated with that person’s e-mail address. Or, see all mail that I received from that person.

And, I discovered that only certain parts of the interface work. Click on something, like “Compose,” and nothing happens. That’s one way to make sure everyone that demo’s the software, from the OGS demo, to the breakout sessions, to the Design Lab, communicates the same message. It also showed my naivete toward demos; I thought it was a fully functional demo.

Next, I didn’t get the feeling that proposed delivery dates for MailNext will be met. To me, there is still a lot of work to be done. And there wasn’t any mention of what needs to be done to the back-end Domino server (other than upgrading it).

What do you think of MailNext and what you saw/heard at Connect (or on one of the streamed videos?)

This article provides a side-by-side listing of new features available in both or in either IBM Notes 9.0 and IBM iNotes 9.0. 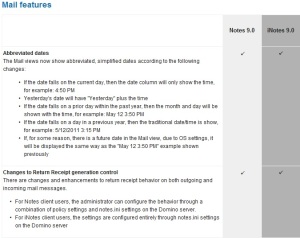 Damn, Firefox causes problems for me and iNotes. You visit a customer to do a simple Domino upgrade and what do you end up spending most of your time resolving? Firefox and iNotes issues.

Now, usually, Firefox doesn’t cause a lot of trouble, especially when you stick with one release and refuse to upgrade. But, of course, there are those among us that cannot abide by being a point release behind. Those are the people that immediately download the latest and greatest. In the case of Firefox, that is a weekly download.

Well, at least it seems like there is a weekly (daily?) update to Firefox.

In this instance, I was able to convince the on-site technical support people to discourage too many people from upgrading to Firefox 15, but for those that did upgrade, they were experiencing some issues:

Thankfully, a well constructed search of the technotes resulted in a solid hit.

iNotes not working as expected with Firefox 15 and later

Added the notes.ini setting to the servers, restarted the HTTP task and all their problems went away. That is, probably until someone upgreades to  Firefox 21, or whatever version is the most current right now.

The lesson is that while it is easy to upgrade your Domino servers, be sure to check the TechNotes/wiki/InfoCenter/forums for issues with Firefox. You can save yourself some time and effort by implementing the requested changes before you restart the servers and tell everyone “I’m done.”