The Recognition I Didn’t Expect

A few weeks back, all of the STAR Chapters in the State of Ohio gathered at the state park in Mt. Gilead, OH, for the annual State Rally. Because I have ridden with several Ohio Chapters, it was a special time for me. Instead of simply hanging out with members of my Chapter, I was able to spend time with friends in other chapters. Riding a bike has really allowed me to travel around Ohio, meeting great people, and seeing parts of the state that others miss when they drive highways.

The State Rally allows the Ohio STAR Ambassadors to present Chapters and individuals with awards for their work throughout the year. In front of pretty much every member of every Chapter.

Not really paying attention to some of the awards; I was talking with the President of Chapter 300 about various topics, some riding, mostly personal, I heard my name being called over the PA system, along with three other members from my Chapter.

We were honored with the Good Samaritan award for helping a fallen rider on August 17. The award: 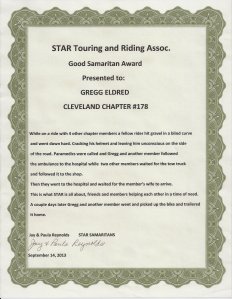 In addition, we were presented a rocker for our Chapter vests (one can never have too many patches):

It was hard to accept that I earned this award. All I could think was “anyone in the same position would have done the same thing.” But, funny thing, a very good friend told me that no, not everyone would have acted in the same manner under the same circumstances. I have give a lot of credit to some amazing people I know, whom I saw in action earlier this year, for demonstrating what people do in somewhat similar circumstances. I will never forget what they did, they are an inspiration to me.

This award is one that I hope I never earn again. However, I need to be better prepared for whatever may happen on the road.

When I got back from Mt. Gilead, I ordered a first aid kit to put in my saddle bags. That wasn’t enough – I’ll be taking a Red Cross First Aid class soon. Next up, a satellite phone – no matter what AT&T, Sprint, or Verizon might tell you, there are some very dead cell spots in Ohio, with some of the best motorcycle roads, and coverage is extremely important. You can’t hope for the kindness of strangers to make an emergency call.

A first aid kit, a sat phone, and more training. Always, more training – the most important item. Anything else?

What is IBM SmartCloud Notes Hybrid?

A great question and one that might be answered in an Open Mic webcast on 24 September.

IBM Support would like to help you take full advantage of IBM SmartCloud for Social Business. During our Open Mic webcasts, technical experts share their knowledge and answer your questions. The sessions are designed to address specific technical topics and provide in-depth but narrowly focused training in convenient, live 1 hour seminars.

This event will be held Tuesday, September 24th, at 11:00 a.m. EDT (15:00 UTC, or GMT -4), for 60 minutes. After a presentation, you will have the opportunity to ask questions directly of IBM Product Managers, Developers and Solution Architects.

Web conference You can find the web conference URL and password in the webcast technote under the “Web conference” section.
Dial-in information Dial-in Passcode: 8119927

With the imminent release of iOS 7, are your Traveler servers ready to handle the new operating system? Traveler has to be at 8.5.3 UP2 IF4 and 9.0.0.1 or later releases. New functions in iOS 7 may not be fully supported until later releases of Traveler.

To get the latest updates and fix packs for Traveler, go here.

How To Make Me Cry

. . . in frustration: Ask me to find IBM software on this site: 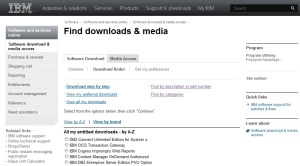 For a site that is used quite a bit, you would think that someone would be an expert at navigating it. Not so. I have said, in meetings with IBM, that it is “soul crushing.” Oh, I know what I want, it’s just finding it that kills me.

Which brings me to an idea I had for a session at a User Group Conference or even at Connect. It will be a panel of individuals from the audience and whomever from IBM that is responsible for this site. Someone will emcee the panel. All guests sit in front of a computer, at the Passport Advantage home screen. The emcee will ask the panel members to find and download an IBM software package. The first person to successfully do so will be deemed the “winner.”

I think that this session will take longer than the allotted time.

As an aside, my co-workers know when I am using that site, based on the sighing and the language that emanates from my cube. What do I hear in return? “Passport Advantage?” Then laughter ensues.

Well, this is a bit late, however the TechNote will be updated in “a couple of weeks” so at least you will have have the opportunity to review the slides and the Q&A.
You are invited to join an Open Mic Webcast on the topic “Using the Database Maintenance Tool (DBMT) and Compact Replication in Domino 9”.  This event will be held Wednesday, 11 September 2013 at 11:00 AM EDT (15:00 UTC, or GMT -4), for 60 minutes. After a presentation, you will have the opportunity to ask questions directly of IBM Developers and Support Engineers. See more details below.  (Note: To view this information online, go here).

Before the call, the technote will include:
An iCal attachment to add this event to your calendar
Details on how to join the call and web conference
The slides that will be presented during the session

A couple of weeks after the call, the technote will be updated to include:
A recording of the session
A written Q&A transcript

To be notified when the Webcast technote is updated, subscribe to IBM My Notifications and select “Webcasts” as a document type of interest.