Graduation day, 20 January 2017, Kilo Company and Oscar Company. This is, IMHO, the greatest graduation ceremony I have ever witnessed. And I’ve seen it twice.

Every time I think about it, I get something in my eyes. Strange.

Graduation takes place on Peatross Parade Deck, one of the largest parade decks I’ve ever seen. Graduation begins with the Parris Island Marine Corps band entering. Then, the Parade Adjunct marks the right flank of the formation and the two graduating companies enter the deck, marching in unison, platoon flags waving in the breeze. It is an incredible sight.

I hope that this panorama of the parade deck, with 599 men and women that are the United States Marine Corps newest members, helps you see just how large the parade deck is.

It was during the Commanding Officers Remarks that something got in my eyes. He’s talking about honor, courage, and commitment. Then he says, “Once a Marine, Always a Marine,” and asks for all Marines in attendance to stand and be recognized. Up goes Number One Son. I’m working on getting “dust” out of my eyes.

I had to laugh to myself after thinking about this. Every other graduation ceremony you might attend wants to honor all veterans in attendance. Not here. They only want to honor Marines. Sorry, Air Force, Navy, Coast Guard, and Army veterans.

After the Remarks, the Marines pass in review, which is another spectacular sight.

Then, they retire the guidons, present awards to the high shooters and high scorers in combined personal fitness, the band plays the Marines’ Hymn, and then there is the Final Dismissal.

Now, another rush to greet the new Marines, take more photos, and meet some of friends he’s made during the 13 weeks of boot camp. 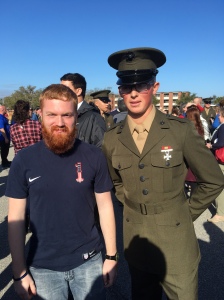 Number One Son with his cousin, his new brother.

After congratulating him, it was time to head back north. But first, a special stop. What Number One Son called “a tradition.” 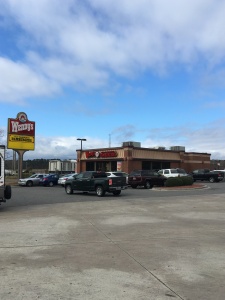 To all, this looks like just another Wendy’s. To my family, this is the Wendy’s where we stopped with Number One Son, after his graduation and he had his first civilian meal in 13 weeks. It’s at Highway 17 and I-95 in Jasper, SC. To quote my blog post from 2010:

On the way home, we stopped at Wendy’s for lunch, with our Marine. What did he eat?

Quite an amazing sight.

This time, it was just a Double Baconator, medium fry, and a soda.

My mother now has all of her grandchildren in uniform: two Marines, a soldier, and a (auxiliary) policeman. I think that is simply amazing and I am extremely proud of them all. Although, as I said back in 2010, “proud” is a word that doesn’t seem to appropriately describe how I feel about them.

I cannot say that I will not return to MCRD Parris Island for a third visit. Of course, it will be with Number One Son in tow. And, hopefully, with Number Two Son. Our family now has a proud tradition of men in uniform after a generation without any.

By the way, graduation ceremonies at MCRD Parris Island are open to the public. If you ever find yourself in the area, please take the time to witness a graduation ceremony. Here are all of the dates for 2017. It will only take you a few hours of your time (depending on whether you also decide to see some of the sights on the base). As I keep telling you, it is truly the best graduation ceremony you will ever witness. Honest.

Nearly seven years ago, I traveled to Marine Corps Recruit Depot (MCRD) Parris Island, SC, for Number One Son’s graduation from boot camp and into the US Marine Corps. Neither he nor I ever thought that we would return.

But we did. Here is what I shared with you seven years ago.

This time, it was for my nephew’s graduation. An interesting tidbit; he graduated from the same recruit battalion and platoon as Number One Son.

19 January, we arrived at MCRD Parris Island for Family Day. The festivities started at the (civilian) God awful time of 7AM for the recruit’s motivational run. This is pretty much just a show for the families, and is a fairly short run, by USMC standards. But it is the first opportunity to see your recruit, even if it is a fleeting moment. At about 9:30AM, we all gather in the All Weather Training Facility. It is here that we watch a film which condenses 13 weeks of training into about 20 minutes. Then, after an interminable wait (remember, the military hardly ever starts anything on time), the recruits enter the facility where we are introduced to the Drill Instructors, reminded of Family Day rules, and on-base liberty begins.

Chaos reigns while family and recruits seek each other out in the massive crowd where laughing, crying, and hugging is everywhere you look.

Our recruit now takes us on a tour of MCRD. First stop, his barracks. His brand new barracks. 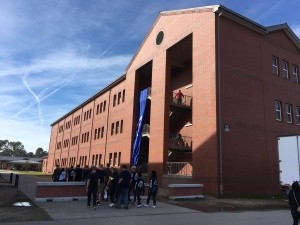 Kind of looks like a college dormitory, doesn’t it? Let’s take a look inside. 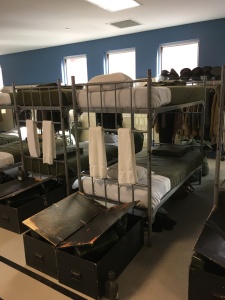 Looks like pretty much every “dorm” you’ve seen, right? Neat and tidy, everything in its place.

They even have showers, sinks, toilets and urinals in their “dorm.” And when they are standing at the urinals, they are reminded to check their stream to make sure that they are drinking enough water with this handy chart: 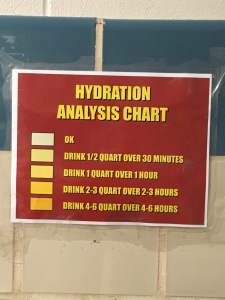 Number One Son and I took a good look around the barracks, as this is not the same one that housed him during his time at MCRD. We made a mental note to find his old barracks.

After the visit to the barracks, we headed to Marine Corps Exchange, which has everything a Marine needs (insignia, clothes, boots, and so on) and everything visitors need (souvenirs, beer, alcohol, gifts, food, and so on). Number One Son picked up some Challenge Coins and I bought a new license plate frame.

Number One Son and I remembered that his old barracks was behind the Marine Corps Exchange, so we went looking for it while the others walked to the Visitors Center, as lunch was being delivered to us.

We found his old barracks: 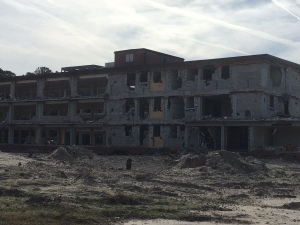 And his old parade deck: 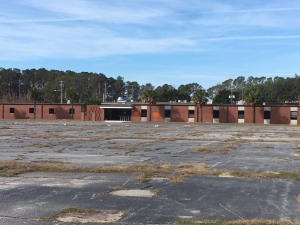 Number One Son was not happy. “Do you know how much time I spent on that parade deck? Now look at it.” He was, IMHO, really upset. I suppose the equivalent would be discovering that your childhood home had been torn down.

On our way to meet up with the rest of the family, we talked with an Army veteran that is working in a civilian role on MCRD. He and Number One Son had a really nice chat about where they’d been, what they’d done. I think that the little conversation lifted Number One Son’s spirits. Plus, for me, it was extremely cool to listen to two vets talk about their experiences.

After an excellent lunch (thanks Laurie), it was time for a few pictures. 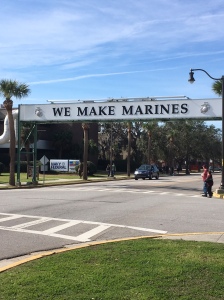 A new Marine and an alumni (say hello to Number One Son). 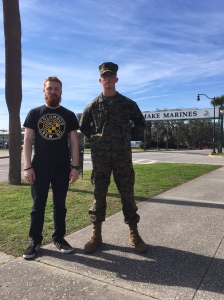 And one of just the new Marine, my nephew: 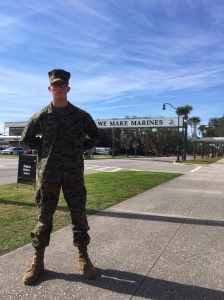 More touring of MCRD followed, before the Marine had to report to the parade deck to practice their graduation ceremony. 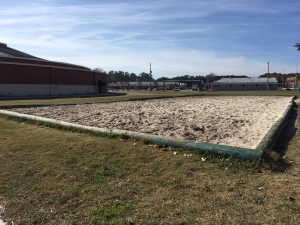 The sand pit. This is where “Individual Training (IT)” takes place. From what Number One Son told me, you don’t want to be in the pit. I trust his judgement. It’s also the only place where the Drill Instructors cannot touch you. But even with that limitation, recruits do feel their wrath. 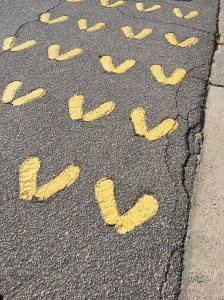 The Yellow Footprints. When the new recruits disembark from the bus, in the dead of the night, they are required to stand on a set of footprints. This begins their welcome into the Marine Corps. 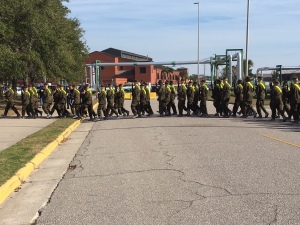 New recruits. Notice the high visibility belts they are wearing. That immediately signals to all that these men have just arrived at MCRD. And, according to Number One Son, signals to all to keep an eye on them during the first week at MCRD, as this is when they are most apt to have issues.

Next time, graduation and fast food.

This is my newest addition and one that I am most proud. Wore it today, as I drove Number One Son to the airport, spent time with him at the gate*, and bid him farewell. 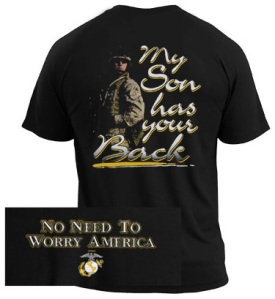 When he arrived in Cleveland on 21 December, it was the first time I’d seen him in nine months. Today was, quite possibly, the last time I will see him for a year. He is currently working up for deployment overseas.

* – As a parent of an active member of the military, I am permitted to go to the gate with my son.