Fame and fortune are just a few mouse clicks away and I easily let it go by me.

Whether they’re getting retweeted by members of One Direction, or liking the Hunger Games Facebook page for a chance to be included in the movie’s credits, today’s teens are directly interacting with pop culture — celebrities, movies, music, and, increasingly, brands — in ways never before possible.

Tweet pictures of yourself at a Lady Gaga concert, and maybe she’ll call you from the stage — a moment sponsored by the cell phone company Virgin Mobile.

Send Beyonce your selfie, and maybe it’ll be included in the Pepsi-sponsored intro to her Super Bowl halftime show.

Do kids think they’re being used to promote these brands? Do they care? Or in a new teenage reality where being Internet famous seems to be just a click or a post away, does the perceived chance to be the next big star make it all worth it?

In Generation Like, an eye-opening follow-up to FRONTLINE’s 2001 documentary The Merchants of Cool, author Douglas Rushkoff returns to the world of youth culture to explore how the perennial teen quest for identity and connection has migrated to social media — and how big brands are increasingly co-opting young consumers’ digital presences.

Frontline’s story is fairly amazing; from the amount of information that kids will share to the lengths they will go to have followers and likes. Then to see the parents of those same kids encourage them . . . well, it’s a new world and one where I don’t have to worry about that behavior from my sons.

As one commenter wrote, “If you’re not paying for it, you’re the product.”

Hashtags. Twitter started the craze, then other sites followed. What has happened in the meantime is that they have become overused. To the point of comedy. Just look at a few tweets these days, hashtag orgasms are what some people are enjoying.

Alas, however, when companies or candidates use hashtags for the sake of using hashtags, the results are, at best, ineffective. At worst, they can backfire embarrassingly.

This month, JPMorgan Chase scrapped an attempt to engage Twitter users with the hashtag “#askJPM” after sarcastic and off-topic responses poured in. This brings to mind similar #fails by McDonald’s and BlackBerry, in which poorly conceived marketing strategies quickly inspired users across the Internet to lampoon their products and services.

Candidates, businesses and advertising firms that wish to boost their online presence or that of their clients can do two things to improve their approaches to social media.

If you are feeling down, perhaps a little blue, take a moment to search Twitter for the #askJPM hashtag. I promise you will feel much better.

A little overuse of the hashtag?

And one of the biggest lies in the universe, too: “Tweets are my own.” Not with those hashtags, buddy. You are bought and paid for by your employer as are “your” tweets.

For the love of all things holy, stop with the hashtag madness.

Thanks for the image, Darren. 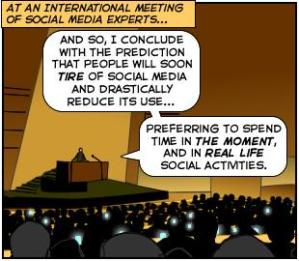 Click the image for the complete Joy of Tech comic. Then you can wonder if this doesn’t hit close to home.

Chaos and tragedy shine harsh lights on our 24-hour, always connected, social media world. NPR, which isn’t immune to reporting false or misleading information in the early moments of chaos and tragedy, had a pretty good report this morning on the latest example, the Sandy Hook Shootings.

It was journalistic bedlam.

Some news outlets signaled their mistakes and that stories were shifting; others glossed over them with updated information, as though they had held the facts all along. But it led to a dizzying sense of impermanence to any description of what had actually transpired.

“A guy was misidentified as a mass murderer,” said Ben Smith, editor-in-chief of BuzzFeed, which straddles the worlds of traditional news outlets and social media platforms. “That’s horrendous.”

The best part of the piece was when they talked to David Cullen, author of the book Columbine, which is viewed by many as the definitive account of that tragedy. It took Cullen 10 years to research and write that book, which discredited many of the beliefs held by the media and the public. In fact, as Cullen said on NPR, ” . . . the media had established to its own satisfaction exactly why the teens turned into killers within just a few days.” It’s always a good policy to allow the media to shape your opinions.

I understand the need to be first, to rush into chaos, and to report on it. However, you need to remember that in the early hours, or even days, of a tragedy, a lot of what you read, hear, or retweet is just plain wrong. If it is found on social media outlets, how is that information corrected? Oh, wait, it is just part of the mind numbing stream and it’s sure to be missed.